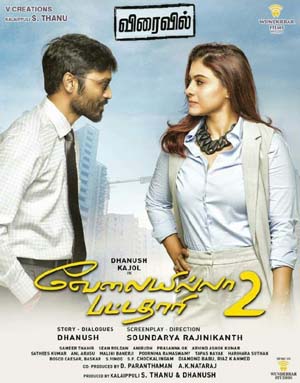 Story: Velaiilla Pattadhari 2 (English: The unemployed graduate) is a 2017 Indian action comedy film directed by Soundarya Rajnikanth. The film was shot simultaneously in Tamil and Telugu, with the latter titled VIP 2. It is a sequel to the 2014 film Velaiilla Pattadhari and has Dhanush, Amala Paul, Vivek, Hrishikesh, Saranya Ponvannan, and Samuthirakani reprising their roles, while Kajol plays an antagonistic role in her second Tamil film after 1997’s Minsara Kanavu. Dhanush, besides acting, also co-produced with N. Ramasamy and wrote the story and dialogues for the film. Its music was composed by Sean Roldan. It was released worldwide on 11 August 2017, after initially planning to release on Dhanush’s birthday, July 28.